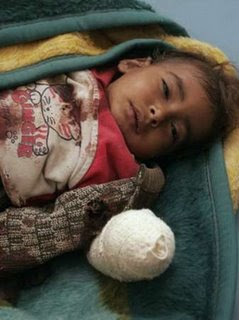 You heard it here first

Anna Nicole Smith is still dead.
Posted by Erik at 2:31 AM No comments:

It was too good to be true

It looks like Libby's lawyers aren't going to call Cheney as a witness after all. Damn. I was sooo looking forward to his having to answer questions under oath and under cross-examination by Fitzgerald, who's known to be a no-nonsense bulldog who keeps to the point, keeps asking the same question until he gets an answer, a real answer. He could have helped us learn how Cheney got the authority of "declassify" (that is, leak) the Valerie Plame information (the answer, of course, is that he had to have spoken to Bush about it, and we would have heard the content of that discussion); to whom Cheney then turned to effect the leaks (there were others besides Libby who were apparently tasked with this); and finally--to me most importantly--we would have learned what Bush actually did to effectuate his own "investigation" of the leaks. Recall, Bush said he was going to track down the leaker and if he/she was found, fire him/her/them. In other words, we could have had a ball.

But my trial-lawyer/politico instincts told me all the while that the listing of Cheney as a witness was a feint, not a reality. Not only is Libby (and by extension his lawyers) too much of a loyal soldier to expose the Bush administration to such scrutiny, but--as the cited article says--Cheney's appearance and evidence would probably have hurt Libby's defense more than helped it.

A wise choice by Libby's defense team, but Damn, damn, damn.
Posted by Erik at 8:59 AM No comments:

In last Thursday’s SB Independent, an essay appeared by a local psychologist who had witnessed our weekly peace march while having coffee at a cafe on State Street. I wrote the following letter in response.

I’m one of the “small ragtag band of war protesters” on State Street that Dr. Seabaugh wrote about in the February 1, 2007, Independent. (“Long Time Passing,” p. 46) I’d like to respond—not, however, addressing—and thus dignifying—his critical commentary on our age, our appearance and attire.

Dr. Seabaugh notes the absence in the streets of war-protesting Boomers. He wonders, “Where is everybody?” He points out that both Boomers and their progeny, “Echo Boomers,” have become inordinately attached to acquiring goods, as opposed to aspiring toward the good, a fact that may be statistically accurate. No mystery there: If Boomer parents have become predominately materialistic, their kids will mirror that trait.

But his question, “What happened to us?” poses an interesting question, one he doesn’t answer. Instead he suggests that new life-lengthening drugs may someday drive older Americans to the streets because they may actually live so long that they’ll have to endure the consequences of today’s government-gone-mad. That prospect, however, misses the point. He asked about today: What has happened to "us" today, to make "us" so lethargic, so distracted, so cynical, as no longer to protest the ghastly course the Bush administration has set for our nation.

This question, to be answered honestly, depends on what a fair definition of "us" is. Some of “us” do indeed march on Saturday—and have done so for 200 consecutive Saturdays since before the invasion of Iraq; some of “us” spend Sundays displaying 3,000 crosses at Arlington West; some of “us” stand weekly in silent vigil at street corners in Carpinteria and Santa Barbara; some of “us” gather at periodic rallies—rain or shine—to rail against Bush administration policies. And many more of “us” write letters, make phonecalls, seek redress from our representatives.

And so the “us” Dr. Seabaugh must be referring to is the “us” who sit idly by and muse about the state of things, but do nothing about them. If that includes Dr. Seabaugh, only he can answer, and only for himself. As for many others of “us,” I quote John Lennon’s “Imagine,” a song we often sing as we march up and down State Street on Saturdays: “I hope someday you’ll join us.”
Posted by Erik at 7:36 AM No comments:

A possible cover for my novel, Gaviota 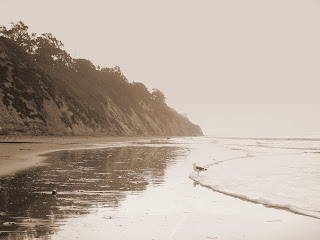 I'm fooling around with my digital camera, trying to create an image that captures "Gaviota," which is a fifty-mile stretch of coastline between Santa Barbara and Point Conception to the north. "Gaviota" is a Spanish word for seagull, and I managed to capture this image at sunrise a few days ago. What do you think?

One of my favorite scenes in moviedom

We're probably not going to win many with incidents like this:

"BAGHDAD - Police and Iraqiya state television said U.S. forces wounded
Suhad Shakir, an anchor working for Iraqiya, when they fired on her car near the
Foreign Ministry in central Baghdad. The U.S. military said it was checking the
report."