How dare those Japanese! Letter to the editor

Here's a copy of a letter to the editor of the Santa Barbara News-Press that I sent today. I'll update this post if/when it's published.

We've just learned from the National Oceanic and Atmospheric Administration (NOAA) that more than a million tons – a million tons – of debris from the earthquake and resultant tsunami-triggered disaster at the Fukushima nuclear power plant in Japan, windblown over the waves of the Pacific for two and one-half years since the event, is now approaching our coast. According to NOAA models, this diffused, enormous pool of trash – of unspecified content, except that most of it is indestructible and likely carries life forms alien to American ecology, to say nothing of an unknown quantity of radiated matter – has by now traveled five-sixths of the way from its catastrophic origin and will begin to invade our western – including Central California's – shores in 2014. And because the pool is so enormous, its debris will continue to wash up here for years.


How dare those Japanese, we cry out, build such a dangerous power plant immediately beside the Pacific Ocean, and directly along what's long been known as the "ring of fire" for its proclivity for Earth-shattering earthquakes! What idiots! What monsters! Why, you'd think the folks who planned it were of the same mind (same corporate structure and mentality) as those who built a similar nuclear power plant along our own Pacific coast – along our own historically active segment of the ring of fire. I speak, of course, of the nuclear power plant ninety miles to our north, at Diablo Canyon.

A brilliant, succinct analysis of the use of drones

I've long time been an anti-drone person, as used for both surveillance and destruction. It's a knee-jerk reaction I've experienced as I've seen so many wars and intrusions on privacy over my time on Earth, and this last expansion of snooping and killing capacity of man has drawn from me a reflexive reaction. But here, briefly and effectively stated, is an essay that focuses on precisely the issues I've not regarded in my reaction to the use of drones to kill, and I'm humbled by its incisiveness.
Posted by Erik at 9:38 AM 3 comments:

I was unable to find it readily on the popular search engines, but here -- published on the website of an Israeli newpaper, Haaretz -- is the full text of the recent speech by Iran's President Rohani to the United Nations. I ask you, What's not to like about it? And -- scroll to the end of the speech -- will you join the WAVE?
Posted by Erik at 10:24 AM 3 comments:

I wouldn't change a word

Here's the text of a letter to the editor of the Santa Barbara News-Press that I emailed today. I'll update this post if/when it's published.


Two in a row for Congresswoman Lois Capps. A few weeks ago, I applauded her vote to de-fund the National Security Agency's secret gathering of Americans' telephone calls. Hers was fine, high-principled vote and although (for now) the vote failed, as our representative in Congress, she truly and faithfully represented the wishes of her constituents. Good for her; good for us.

Well, Congresswoman Capps has done it again. On August 29, she, along with fifty-nine other Congressional Democrats, co-signed a letter authored by Congresswoman Barbara Lee and directed to President Obama, calling on him to submit the question of the use of force in Syria to Congressional inquiry, debate and decision. The letter, while acknowledging the severity of the situation in that embattled nation, was unequivocal in asserting the responsibility of Congress to authorize military force in foreign nations, a responsibility expressly reserved to Congress in the Constitution.

The recent unilateral war-making by our presidents must come to an end. While they are commanders-in-chief of our armed forces when engaged in conflict, the threshold decision to use destructive force in a foreign country is not the president's. The framers of the Constitution understood that such a step was so important that it required discussion and debate – traditional tools of democracy by which the citizenry, not a single person, decides the fate of the nation.

Congresswoman Capps understands this, and understands that her constituents do too. She deserves a salute for that understanding and her actions in accord with it.
Posted by Erik at 9:07 PM 2 comments:

Here's a letter to the editor of the Santa Barbara News-Press that I sent today. I'll update this post when/if it's published.

Congratulations to Congresswoman Lois Capps for voting in favor of the Amash/Conyers amendment, which sought to de-fund the blanket collection by the National Security Agency of Americans' telephone records. In voting to support our constitutional rights to free expression, free association and privacy – foundations of the liberty Americans have fought and died for – our Congressional representative exhibited courage and principle, taking a position in opposition to the Obama administration as well as that of the Democratic House leadership, whose Chairperson Nancy Pelosi and Whip Steny Hoyer both voted against the amendment and urged all House Democrats to do so.


Although the amendment was narrowly defeated – 217 to 205 – Representative Capps was joined in support of this fundamental expression of our citizens' freedoms by both progressive Democrats and conservative Republicans, who found NSA's secret, massive collection of our telephone calls an unlawful and outrageous intrusion on liberties. Our Congresswoman, whose voting record is hardly perfect, deserves praise when, as in this instance, she gets one very, very right.

The recent death of nineteen firefighters while battling a wildfire in Northern Arizona is sad, sad. It calls to my memory the memorial I "discovered" in Prineville, Oregon, while I was on one of summer trips to the northwest. The little park -- a pathway lined with small headstones honoring each of the fourteen firefighters from the local area who were killed during a fire in Colorado -- and a large bronze statue of firefighters, was so fine, so sweet and gentle and heroic, that I took photos of the memorial and returned to visit it a few summers later. 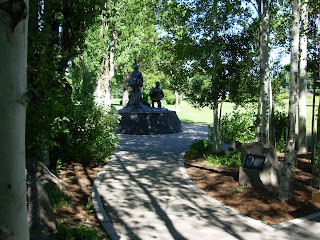 Here's a recent article about the Colorado fire.

They don't hate us for our freedoms (such as they are, of late)

They hate us for this.
Posted by Erik at 9:50 AM No comments:

Here's a letter to the editor of the Santa Barbara News-Press that I emailed today. I'll update this post if/when it's published.

During recent testimony before the Senate Armed Services Committee, Defense Department officials were asked to define the duration and breadth of the "war on terror," as part of the committee's hearing on the need for revision of the 2001 Authorization of the Use of Force (AUMF), under which the U.S. carried out military operations in Iraq and Afghanistan. The answers were shocking (though largely unreported in the major media): Michael Sheehan, Assistant Secretary of Defense, testified that the "war" would likely last "at least ten or twenty years" after the expiration of President Obama's second term, while Defense Department counsel Robert S. Taylor stated that the authorization to attack wasn't limited in geographical scope – as evidenced by strikes in Pakistan, Yemen and Somalia – and that the definition of groups that are within the scope of U.S. attack is "a bit murky." As to how and when the war might be determined to end, Taylor stated that it was "unclear."

A more textbook example of George Orwell's 1984 vision of endless war cannot be imagined. And so this is the legacy of our generation: a war with undefined enemies, undefined territory and undefined end. Good luck, my children and their children. Have a nice life.

These are just the sort of folks we should be supporting, right?
Posted by Erik at 8:22 AM 1 comment:

A death in the family.
Posted by Erik at 3:48 PM No comments:

Where are the bread riots?

This video, concise and clear, gives perspective on wealth distribution in the U.S. today. Hard to stomach, isn't it?
Posted by Erik at 9:11 AM No comments:

Glenn Greenwald does it again! If you're short of time, scroll to the penultimate paragraph of Glenn's piece and then watch the brief video at the end. Spoiler alert: It's a campaign ad for Ron Paul.
Posted by Erik at 9:12 AM No comments:

Here's a letter to the editor of the Santa Barbara News Press that I emailed today. I'll update this post when/if it's published.

It's now clear beyond doubt that the Obama presidency has not only embraced but has grossly expanded the claims of lethal authority made by the Bush administration. Astute news-followers have known for years that Obama's assertion of the power to kill anyone who is "determined" to be a "threat" to American interests has been taken much further than even Bush and Cheney dared. Despite the President's effort to keep them secret, reports of Obama's "kill lists" surfaced in 2010, as have reports of at least two drone strikes on American citizens. And within the past few months there have been repeated references in the press to "terror Tuesday" meetings at the White House where the President's advisors gather to decide who deserves to die.


But now, after the Senate hearing on the nomination of John Brennan as CIA director and the release of a Justice Department "white paper" on the subject, it's starkly presented: This president claims the power to assassinate anyone, including Americans, whom he (or an "informed high-level official") – by exclusive executive decision – determines must die because they're part of a group that's an "imminent threat" to the United States.


So the question is, Where's the outrage? If Bush/Cheney had claimed such power, Democrats would be screaming from the rooftops words like "dictator," "Stalin," and, of course, "Hitler." But now that it's their man in the Oval Office we hear from them (with a few exceptions) a deafening silence. To call these Democrats hypocrites is to slur hypocrites.
Posted by Erik at 9:27 AM 1 comment:

A nine-minute speech that says it all

Sadly, Eisenhower's farewell address wasn't heeded.
Posted by Erik at 8:26 AM No comments:

I've listened in vain for the President in his Inaugural Address, or for any of the several mainstream commentators thereon, to address a fundamental component of Martin Luther King Jr.'s ideology, that of an end to American imperialism, its global warmaking, its constant use of violence to obtain the aims of its oligarchy. A fine exposition to this effect by Glenn Greenwald may be found here.
Posted by Erik at 5:57 PM No comments:

One of my favorite TV personalities has died. OTOH, Downton Abbey, season III, is underway.
Posted by Erik at 7:54 PM No comments: